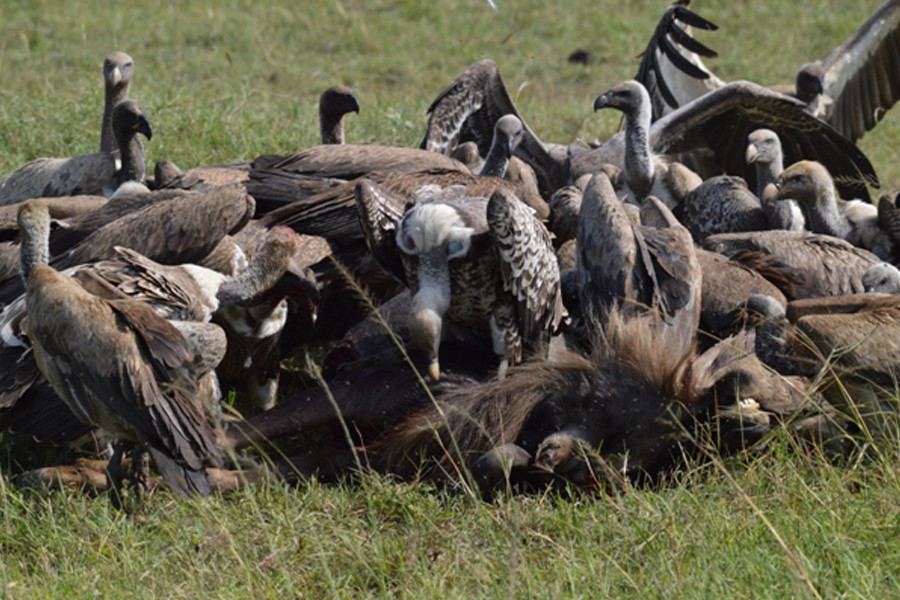 The ‘Big’ Safari- a trip for three generations- (3rd part)

Our itinerary was four nights at Masaai Mara at Destiny Eco-camp. This is a mid-budget place with semi-permanent tents which are spacious and have proper beds and an attached bathroom with running water and a flushing loo. It was near enough to the park to be able to see animals grazing right in the morning. Electricity was provided through generators early in the morning and from dusk to around 10 pm. Power points for recharging batteries and phones were available at reception where everything was absolutely safe. William the manager was a Masaai man in traditional red and blue checked garb. The skull of a huge water buffalo that decorated the stairs to the dining space was his hunt in younger days.

The safari days merge into long dusty and bumpy drives through the mostly flat and sometimes gently undulating savannah terrain. Lions we saw in plenty, the five cheetah brothers famous in the park were sighted resting in the shade of a circle of trees and the herbivores impressed with their numbers. Migration takes place on land and on water. We saw hordes cross the horizon in a single file, impressively straight only through ages of primeval instinct. Jackals and hyenas slunk between kills. Elephants butted their heads against ancient tree trunks, displaying raw power.

We had often seen vultures feeding on carcasses, nothing notably special. But we had never seen how they started. We came across a half-eaten wildebeest; four vultures were eying it warily while two more stood behind them. There was a crowd circling above, keeping a keen eye on the proceedings. The first four vultures kept everyone else away. Any attempt to get near to the carcass was met with a lot of pecking, squawks and a fluff of feathers. Soon the order was sorted with a queue (I was really impressed with the queues in Masaai Mara, all the animals loved queuing. I beginning to realise that queues are more instinct than learning perhaps?). It looked quite comical, eight vultures standing in a row, their long necks bobbing as they peered at the carcass doubtfully as if anxious that it would suddenly stand up. Then the leader walked up slowly and took a tiny peck. Just a tiny one.

It stood on edges of the carcass and after that peck shot away with as if touched by an electric shock. Then it looked up slowly to check if anything had happened. After a few seconds, it went up for another tentative peck. The others in their queue waited with strained necks. After a few more pecks, it flew right onto the centre of carcass and started feeding in earnest- large chunks of meat from within the rib cage, emerging with a bloody face and bloody beak, savage tearing and greedy gulps. Within seconds the others had alighted on the dead wildebeest covering it completely. The vultures circling above joined the melee, jostling, grabbing, tearing, fighting.

To our surprise three Malibu storks joined the bloody feast. Never heard about them being scavengers. Distinctly bigger than vultures, with longer and larger beaks, they strutted around the dome of vultures on the carcass, with a regal air. Now and again they would dip their beaks through a gap in the vulture crowd and emerge with a large chunk of meat which they took pleasure in savouring slowly. As we left two tiny jackals were trotting to the feast but I think they would have had to wait before they got any leftovers.

The ‘Big’ Safari- a trip for three generations- (2nd part)

The ‘Big’ Safari- a trip for three generations- (4th part)