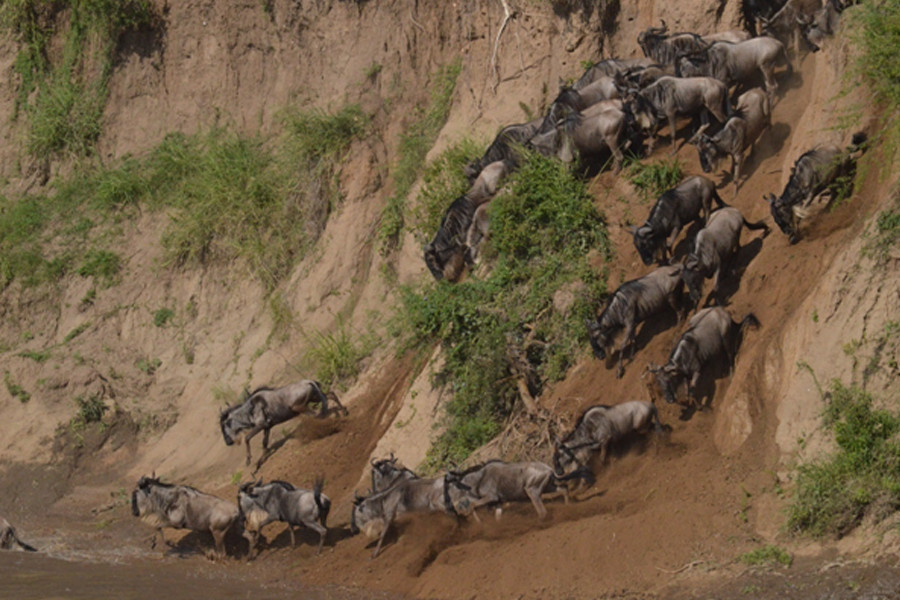 The ‘Big’ Safari- a trip for three generations- (4th part)

The highlight of Masaai Mara was of course the Mara river crossing. We set off on our last day in the park at 6 am, after an early breakfast to drive right to the river. Just as we reached the river which is bound by high dusty red banks on both sides, Omandi exclaimed, ‘They are crossing!’ A crowd of wildebeest from the Tanzanian side pounded the edge of the bank and then settled in multiple ranks. Restive and pawing at the ground they looked ready to charge down the slopes, but just held back. Omandi told us that it could be within seconds, could roll into hours- there was no surety in nature.

A number of vans were waiting near the bank. The wildebeest appeared to be in tortured dilemma, advancing just to the edge, then turning back, then circling back again. The vans drew back from the opposite edge and we followed. The animals needed to feel unobstructed and not threatened.

The wildebeest kept peeking through the line of trees which hemmed the bank. Within the building excitement, one jumped into the muddy waters and scrambled through the waters. A few seconds later a second one, then a third- then started the deluge. Hundreds of wildebeest encouraged by the first brave ones, streamed down in a black waterfall over the slope and into the water.

The vans roared into life and charged in their own deluge down to the river bank. Omandi got us a brilliant vantage point where we had the perfect National Geographic (excuse the cliché) view of the ongoing crossing.

There was a sandbar in the middle of the river where they scrambled up, circled around like the eye of a storm before gathering up courage for the second time to dip into the second half of the river and finally scrambled up to our bank to join the thousands. It was a sight that set our heart beats going at mad paces.

After the four exciting nights at Masaai Mara, the two nights at Amboseli were quieter and slower paced. The highlight of Amboseli is the backdrop of Mount Kilimanjaro which appears only at certain times of the day if you are lucky. Most of the time Kilimanjaro is covered by clouds. We had the fortune of seeing it both days and on one full moon night, sparkling in the night light of the moon and thousands of stars. And we even managed a picture of the tusker in front of Kilimanjaro at sunset!

As I peruse the pictures to select for this article, more memories come to life. But I will leave that for some old-fashioned Bangaliadda one evening with cardamom flavoured tea in a ‘bhaanr’ and some fresh hot ‘telebhaja’. So much for now my friends.

The ‘Big’ Safari- a trip for three generations- (3rd part)